Today is the 50th Anniversary of the first Earth Day!

This now internationally recognized day has its roots right here in California and was started after an oil spill off the coast of Santa Barbara. Valley Improvement Projects and its members have long seen Earth Day as a great opportunity to raise awareness about the numerous environmental injustices occurring worldwide, and especially locally. Obviously, we would rather be out at events providing information on various issues, connecting with local community members, and enjoying some much missed sunshine but we understand the importance of protecting public health and are happy to do our part by making Earth Day virtual this year!

We’d like to provide our supporters with a quick history of our involvement with Earth Day throughout our history as well as information on our current and upcoming projects that we were not able to share with the community at Earth Day events this year:

-2012: During the time VIP was being formed we organized a “Chalk Action” where youth and other community members drew art and wrote messages about Environmental and Social Justice-related issues on the sidewalk in and around Graceada Park before and during Modesto’s Earth Day.

-2013: VIP organized and held its first “People’s Earth Day” event at Enslen Park, across the street from Modesto’s Earth Day Festival where we raised awareness about problems with the city’s event and local Environmental Justice issues. As part of our networking with Environmental Justice organizations across California, VIP members also spoke at the U.S. Environmental Protection Agency (EPA) office in San Francisco with over 65 other organizations to demand they protect our climate, health, and communities, not polluters! (https://youtu.be/nHH0VIM6d04)

-2014: VIP held our much larger second “People’s Earth Day” event where we distributed donations of clothes and food to the homeless, held a bicycle-repair workshop, a composting demonstration, various kids activities such as coloring and face-painting as well as guest speakers on local topics such as the barium contamination area near Needham and Hwy 99, the Covanta trash incinerator, and Gallo Glass which pollutes the air and was also being sued by the state for violating environmental regulations. (https://valleyimprovementprojects.org/2014/04/18/join-us-tomorrow-the-need-for-a-peoples-earth-day-in-modesto/)

-2016: After the city of Modesto made several of our suggested improvements to their Earth Day Festival such as not being sponsored by local trash incinerator Covanta and oil company Boyett Petroleum, banning styrofoam food containers, adding more recycling bins throughout the park, and lowering the number of gas generators used at the event, VIP became an official participant and tabled at the event, speaking to community members and continuing to raise awareness about local Environmental Justice issues.

-2017: VIP once again participated in both Modesto’s annual Earth Day Festival in Graceda Park and a meeting with U.S. EPA officials in San Francisco with hundreds of members of the California Environmental Justice Coalition (CEJC) and other allies which was then followed by a rally and march to the SF Federal Building. (https://valleyimprovementprojects.org/2017/05/16/vips-earth-day-weekend/) 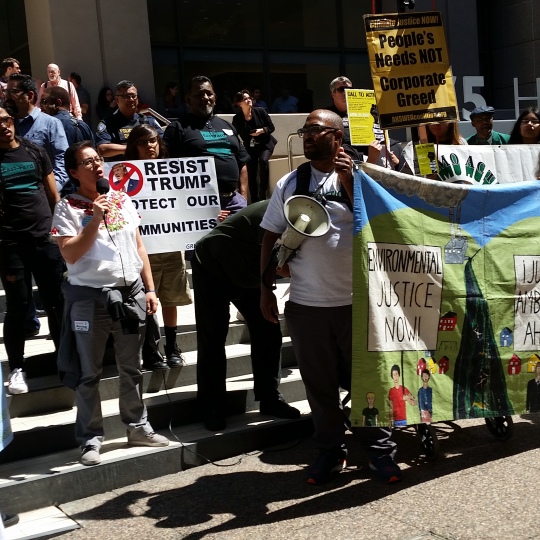 VIP speaks at an Earth Day rally with hundreds of others Environmental Justice activists at the US-EPA building in SF, 2017

VIP marches for Environmental and Climate Justice with the California Environmental Justice Coalition (CEJC) and hundreds of other front-line activists in SF, 2017

-2018: VIP collected over 200 signatures at Modesto’s Earth Day event as part of our #BringBacktheBlueBin project to advocate for curbside recycling in Modesto to minimalize the amount of recyclable material burned at the local incinerator. (https://valleyimprovementprojects.org/2018/05/28/vip-launches-bringbackthebluebin-campaign/)

-2020: In addition to tabling at Modesto’s annual Earth Day Festival, VIP was also in the process of helping organize a youth-led Climate Justice march and rally in collaboration with the Modesto Peace/Life Center during the event. VIP also reserved spaces at the Tracy and Stockton Earth Day events in order to promote the Clean Vehicle Rebate Project (CVRP), which offers incentives for purchasing electric and hybrid vehicles for San Joaquin valley residents. VIP members were also helping the California Environmental Justice Coalition (CEJC) organize a youth-led Climate Justice march and demonstration in San Francisco with Youth vs. Apocalypse that was expected to be attended by thousands. Hopefully these events will still happen at a later date.

In addition to the above mentioned events, VIP is currently working on several projects that, while slowed down at the moment, will be ongoing through 2021, they include:

-Continuing to raise awareness about the Covanta trash incinerator, the pollution it emits, and its contribution to the lack of curbside recycling in Modesto, as well as advocating against its classification as a generator of “renewable energy.”

-Raising awareness about other impact-full Environmental Justice issues in our community including air quality, safe drinking water, pesticide exposure, and sustainable community development and how they affect our most disadvantaged and vulnerable communities.

-Youth-led Climate Justice March and Rally: As mentioned above, being organized with the Modesto Peace/Life Center, local community members, as well as several high school and college students. Hopefully this becomes an annual event!

-As also mentioned above, providing information about rebate and other savings programs available for low and moderate income residents of Stanislaus County and the Northern San Joaquin Valley who purchase a new or used electric or hybrid vehicle. Ask us how you can get a $10 gift card for completing a survey!

-Also in the works: Assist with conducting surveys of local farmworkers to assess the short-term impacts of COVID-19.

….Oh, and by the way, Rest In Power to our co-founder Emiliano Mataka, without whom none of this would have happened! We miss you Emi!!